I have a cabinet in the dinning room set up for family use, have always just used Pandora Box jamma boards. I know they dont have as many games as using a PC or a Raspberry PI; however they just work out the box with no hassle meaning its just easy.

My trusty cabinet below is really easy made, when a new version of Pandara Box is released its a matter of 2 screws inside and a couple of leads swapped over.

Pandora Box 4 was pretty good then version 5 appeared at the end of last year which had out run on it and another few hundred games…….

About a month ago Pandora’s Box 6 was released which has raised the bar a bit. This post is going to be in a couple of posts as i intend to put a few pictures on and give my honest john review of where Pandora’s Box has got too…. 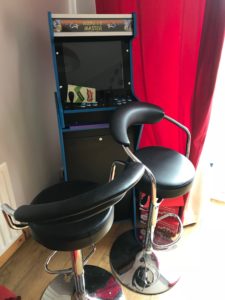 @nigel_venables PTO not work I hope 👍

@nigel_venables Where you off too

@aaronbuley @Dark_KnightUK @paulsanders87 @seanpmassey We have had 4 cats in the past, no issues… however if you want peace don’t get bengals…. Honestly you can have a full blown conversation with them 🤣🤣🤣🤣

Just to add to todays interesting news I also won the postcode lottery ( £20 ), then my car decided to challenge a pothole. Guess who won 👎 . I was up £20 this morning, alas -£280 down now… 🤷‍♂️ pic.twitter.com/ZGRnFOy8fm

@andynash99 Devolo, I have the devolo magic2 . Very impressed, just not the cheapest.