Its been ages since i last did a post….. One of the major reasons is down to a nasty fall on ice back in January……..

My usual routine when i get up in the morning :

Alas on this occasion there was quite a bit of recycling so i had both arms full with a mix of cardboard and glass, as i tuned the corner at the back of the house i slipped on ICE…. My face took a major hit and i ended up with a golf ball lump on it straight away. Funny thing was i felt it but no pain as my right hand had an empty bottle in it when i fell and smashed, i was more concerned with the flowing red coming from it …. Also probably a bit of shock and my brain protecting me.

Ended up being a visit to the hospital, lots of x-rays on my face and both arms / hands …… Broken left forearm, broken wrist and a lot of cuts on my right hand…. I wont show the picture of the golf ball that appeared on my face from the fall….. The good news by the end of the day it had gone down.

Pretty much lost the use of both hands for around a week, honestly this hit home so much. We take so much for granted, sight, smell, walking being able to pick things up. I could just about go to the loo and feed myself as long as the food was cut up…. Bit of an eye opener for me….

Checkup after 2 weeks or so and they had to take the cast off as i have arthritis in my left wrist and it was going to cause me more harm that good….. Words of being carful came to mind……

Week 4 a cut on my left hand would just not heal, well it was more of a stab wound…. Back in hospital and another x-ray —— piece of glass stuck in it……. I tell you now the revilement of this being taken out was fantastic. 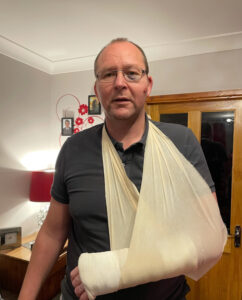 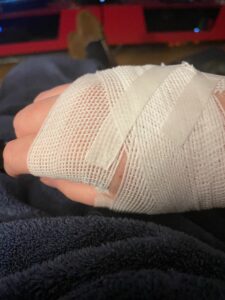 Middle of March i was all signed off and as fit as i could be……. I had put so much weight over the last year with COVID and being honest even more since i did this. From being about 16st 10lbs to just under 18stone hit me hard… However my head is focused and back in training….. Thats for another day….

Moral of this blog, be carful in the winter. Every time i walk past the spot i fell i still have flashbacks… Shows this fall got to me more than i thought.

What a title, however i thought it really made sense when i decide to write a few words from the past 10 months.

As someone who is a bit of a health fanatic, i watch what i eat, done martial arts for around 30 years and regularly attend the gym the pandemic sort of knocked me off my normal ways. Some months i have been great, good eating, little alcohol, exercise 3 / 4 times a week. Other months its been a disaster, far to much alcohol, crisps, eating gone out the window – plus the best exercise i have managed is walking from my bedroom to my office across the landing. Weight has been a good one as well, up a stone / down a stone and basically my body not knowing whether it was coming or going.

It came to me i needed a bit of support and motivation, actually other people needed the same. I asked on our teams slack channel around setting a little group up calling it ” Fat Club ” – more of a joke as none of us are really that bad. Idea was to try and motivate each other, help with ideas around exercising at home or help with exercising outside. Also bouncing ideas off around nutrition. Most had apple watches, we started challenges with each other, partly to try and motivate and push each other….

Has it worked ? Yes and no, most of us have kept things going although some of us have good and bad months – me included. However what it has done is allow us to channel our energy to support each other. I for instance took up running, never done it in my life and successfully completed the couch to 5k back in August. OK i am never going to get a world record however one thing someone in the vCommunity said to me, ” Every run is a good run because you have done it “. Another person in the group bought the same running machine i have and again has completed couch to 5k, even done night running which looks so bizarre. I even tried hill running, however i will be honest it near killed me LOL.

The little slack group is still going, we are still supporting each other…….

Christmas is nearly here, i have got back into training and my mind is pretty positive. I thought about the attitude of new start in the new year however i decided i would make changes now !!!! by the new year i would be in a better position…….

What a year we have all been through, honestly if you had asked me about a Pandemic a few years ago i would have responded ” Not in my lifetime “.

It seems only yesterday i was on stage with some colleagues talking around mental health, some personal stories and then a Q&A session with Joe Baguley joining myself and Craig on Stage.

Conference’s this year have either been cancelled or gone to a pure virtual event, the UK vMUG moved to a virtual event – which i was really pleased about.

I was asked if i would record a 10 minute lightening session on Mental Health in the Pandemic to be shown on Tuesday 24th November ( day of the conference ) just before the closing keynote..

Honestly i prefer to stand on stage than either present virtually or record a session, but hey thats my personal preference.  We did repeat the session we presented last year at the London vMUG back in April virtually which got feedback and quite a few people attending on the day.

Anyway instead of repeating what was presented last year and earlier this year, plus only having 10 minutes i did something slightly different. The whole aim of the session was around trying to be more healthy, make use of the extra time we have in getting some type of new hobby. One of the key points was trying to avoid anything IT related and try something ” NEW “.

In case you missed the 10 minute lightening session here it is you watch at your lesiure. It goes without saying if you have any questions, need some advice around mental health please reach out to me on twitter @bonkeydave

As everyone is aware, across the planet the world we live has changed very drastically over the last few weeks. The hustle and bushel of daily life, enjoying normal social interaction; things like going to :

restaurants
going to the gym
going to the park
Socialising in general
have become very restrictive very quickly.

Most of us are now in the situation of general lockdown, forced to work from home and with schools shut meaning home life and the working environment has also changed drastically.

Its very easy to become isolated / feel alone and generally worried in the current situation as such its never been so important to support both our colleagues as well as our friends and family.

Some people are lucky to work for a company that has adopted digital transformation which allows us to work from home, others not and for a great deal of people job losses are present. If you are still working then we all facing new challenges some of which we have not faced before. We now need to adapt our working practices at home to reflex the current situation. Take regular breaks, make sure you eat and take breaks regular and more than ever put some structure around your day.

We all have to SUPPORT each other, pick the phone up, check in with a colleagues and have a chat.

Speak up if you are struggling whether this is to a friend / family member or a colleague or your manager.

Utilise any HR support services on offer for the region you are based.

Use the vCommunity !!! there are lots of people who would to have a chat.

Whenever i present on Mental Health i always spend a good amount of time on this picture. I always explain that lets be honest not many people are Excelling, i am not here to say people aren’t. However with all the pressures of life ( yes its constant ) we are generally balancing between Thriving and Unsettled. Every now and again we may dip out big toe into Struggling however we will move back into unsettled.

A Prime example is myself, i have had a difficult 2019 and probably spent most of my time struggling and unsettled. This is not me in crisis, this is purely me having a bad year.

Few pertinent points on this picture :

Tiny bit late i know, been meaning to put something on about this a few weeks ago. Well lucky enough to get a slot to present on mental health, every better it was a Community cross company presentation between :3 people from VMware

Presenting on this topic is pretty hard especially when you have personal stories included. Myself, Simon, Michael and Craig as far as i am concerned did a grand job on the day. I even has a few customers in the audience so a first for me with that.

Feedback after the presentation has been great and heartwarming, it really does show the community understands the importance of Mental Health in IT and that we are all here to support each other.

We are back presenting at the London vMUG in April and then the Yorkshire vMUG in May so hopefully we will get good turn outs at the sessions on the day.

@nigel_venables PTO not work I hope 👍

@nigel_venables Where you off too

@aaronbuley @Dark_KnightUK @paulsanders87 @seanpmassey We have had 4 cats in the past, no issues… however if you want peace don’t get bengals…. Honestly you can have a full blown conversation with them 🤣🤣🤣🤣

Just to add to todays interesting news I also won the postcode lottery ( £20 ), then my car decided to challenge a pothole. Guess who won 👎 . I was up £20 this morning, alas -£280 down now… 🤷‍♂️ pic.twitter.com/ZGRnFOy8fm

@andynash99 Devolo, I have the devolo magic2 . Very impressed, just not the cheapest.